A few comments on the Acts of Whimsy cancer fundraiser.

First, the fundraiser is ongoing, with some cool unlocks in the modest stretch goals ahead.

Second, if you missed it elsewhere, see this video of me explaining the genetic testing the fundraiser is for. I’m kind of proud of that, as it was done in one take with no script or rehearsal.

Third, I met with a tax accountant yesterday who confirmed that the funds raised are not taxable under either Federal or Oregon law, but also confirmed I would likely face some significant reporting and accountability requirements in order to demonstrate the source of the funds. They were very helpful in describing how I could best meet those requirements. I am now armed with information for my spring, 2014 tax filing for tax year 2013. They were also incredibly gracious and declined to bill me for their time, given the nature of the inquiry.

Much like every other aspect of this fundraiser, I encounter amazing generosity everywhere I go.

I’m not obsessing about the forthcoming surgery, but it remains on my mind. Any surgery, especially any major surgery, is a drastic event. There are significant if unlikely risks of various adverse outcomes. Still, surgery is fundamentally acute, unlike the chronic nature of chemotherapy. I’ll be doing prep on Monday, including going on a liquid diet and enjoying a bracing colon cleanse. Plus lots of showering with the special magic surgery soap.

I expect to be out of the hospital around Friday or Saturday of next week, with a week of intensive recovery at home, and a number of weeks of continuing mild recovery after that.

I’m feeling more daunted by the resumption of chemo, truth be told. We won’t know my forthcoming regimen until after the surgery, when my surgical oncologist and the surgical pathologist have clarified whether Ashcroft is a fourth tumor, a scanning artifact, or something else. If Ashcroft is real (the most likely outcome), I’ll go off the FOLFOX but remain on Vectibix. Which would be a lot less physically disruptive to me, but also not exactly a Good Thing. If Ashcroft washes out, I’ll remain on the existing FOLFOX/Vectibix regimen through late April, depending on my exact start date.

Yesterday, I received a care package from and . Those boys are some kind of fun and funny. I will be posting photos, probably Sunday or Monday, of the contents, which may have settled during shipping and handling. (Much like myself.)

Also yesterday, after visiting the tax accountant I visited my rather manic hair stylist. This was the result: 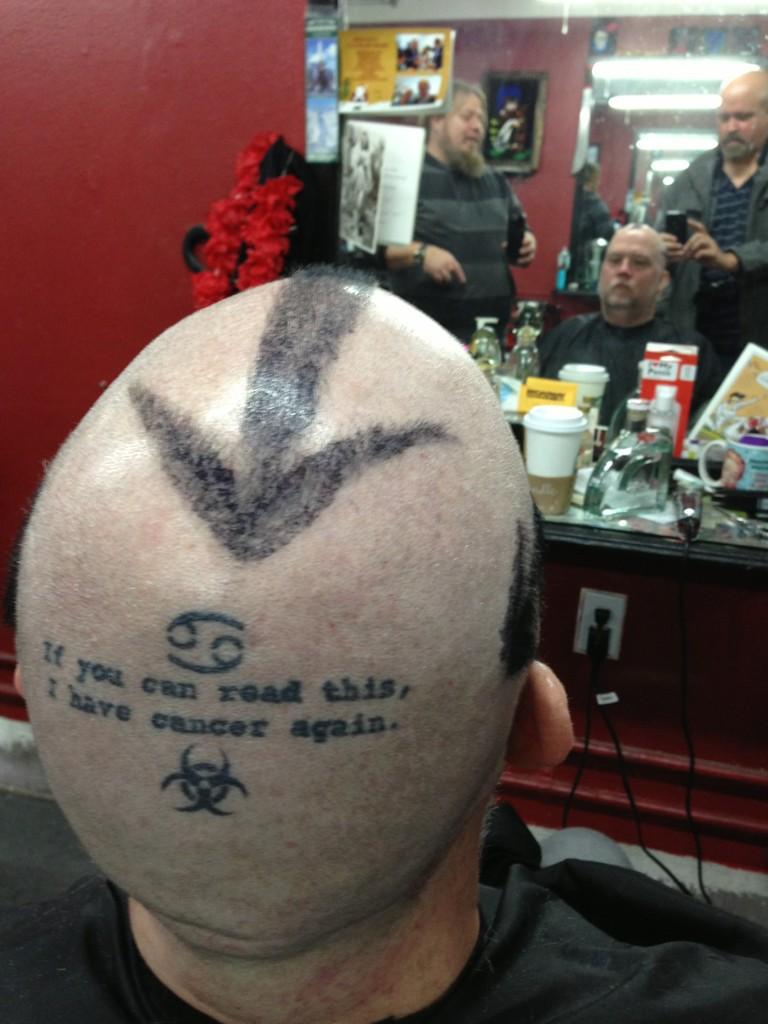 And yes, there are arrows on both sides of my head. Sidehawks, if you will. I wanted to give the OR team a giggle next Tuesday.